Delivery & Pickup Options - 86 reviews of 59 Diner - CLOSED "Somehow or another, eating at the 59 Diner on Christmas has become a family tradition for us. Last year, it was because at midnight, after our guts had finally cleared from the orgy of turkey, we actually became hungry and sought out food that we didn't have to cook. We were surprised but pleased to find that 59 Diner was open. This year, we tried to find that new kebab place on Christmas Eve and by the time we managed to get the brood into the vehicle and get over there, it was closed. So we decided on 59 Diner because we knew they'd be there. It was a good decision. They're never terribly crowded, they're always clean, and service is always pleasant. Plus I have an affinity for anything vintage/50s, so I like the decor. We started off with fried mushrooms, and I have to say, 59 Diner's mushrooms are among my top 5. They're perfectly golden, not too much batter, seasoned well, and they don't fall apart if you cut them in half to cool them down faster. Just as we finished them off, our meals were brought out. I got fish 'n chips with an added side of spinach (gotta have an unfried veg, right?), and my daughter got the fried shrimp plate with fries and green beans. We split our dinners so we could both have fish and shrimp, both of which were fried just right. The fries were crispy, the green beans had a lovely taste, but the spinach tasted like it was straight out of the can. Oh, well, can't win 'em all. Hubby got some chili-cheese-burger monstrosity the size of his head; he reports it was good. When the waitress was taking our order, she asked if we were going to let my toddler just pick food from our plates, which I thought was a strange question until I saw the kid's meal. We got him a corndog, and it came with fries, but I wouldn't have called it a kid's meal because it was humongous! He would've eaten it all if we let him, but then again, he also eats straw wrappers and old Cheerios off the floor if we're not quick enough. I think we're going to continue the tradition next Christmas. 59 Diner never disappoints and the fact that their staff works a holiday yet still manages to remain so friendly and welcoming says a lot. P.S. Beware the traffic lights around this location, they are of the dreaded "red light camera" variety, which I found out the hard way!" 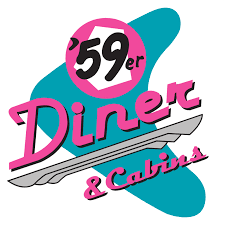 Not responsible for lost, stolen or damaged cards. Cannot be used towards gratuity.(gcb.today#12FD59). This card has no cash value. Non-transferable. Non-refundable.