Gift Cards. Give the gift that always fits. If you''re stuck for a gift idea, you can''t go wrong with a Gift Card from the Athlete''s Foot. The Gift Card can be purchased in-store for any value you wish. Do you know someone who suffers with knee pain, back pain or headaches? Believe it or not, these issues can sometimes stem from ill-fitting shoes! 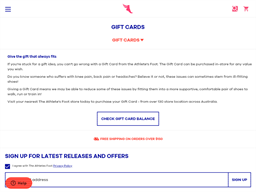 
FOR CARD BALANCE OR ASSISTANCE CALL OUR HELP DESK 0N 1300 55 33 80. TERMS AND CONDITIONS OF USE: This gift card expires on the expiry date shown below.(gcb.today#02C8). Treat this card like cash. Defaced.(gcb.today#193B). mutilated. altered.(gcb.today#9B3A). lost or stolen cards will not be replaced. refunded or redeemed. This card is: Redeemable for merchandise or services at participating The Athlete''s Foot stores only; Not redeemable tor cash and cannot be used for payment of credit or retailer accounts; Must be redeemed before expiry date shown on card; Will be void and may not be redeemed after this expiry date; Cannot be reloaded; Is partially redeemable: Cannot be used on a sale of under $20.(gcb.today#0105). Cash will not be given for any unused balance. Unused balance on expiry of this card will not be refunded Or credited. purchases exceeding available balance require difference paid by.other method.(gcb.today#B7EC). We reserve the right to change any terms contained in these Terms Of Use at any time. For full Terms and Conditions please refer to the card carrier. IMPORTANT: THIS CARD EXPIRES 12 MONTHS FROM THE DATE OF PURCHASE . Gift Card service powered by Wright Express ABN 81 085 449 529 .


Discover a wide range of athletic and lifestyle footwear and apparel online with the experts in fit - The Athlete''s Foot.


If you''re stuck for a gift idea, you can''t go wrong with a Gift Card from the Athlete''s Foot. The Gift Card can be purchased in-store and online for any value you wish. 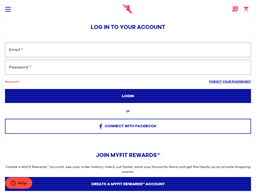 
How To Purchase online:
1) Choose a Gift Card below
2) Add to bag and checkout
3) Add a personalised message for the recipient (optional)
4) Complete your purchase
5) Once its verified, your recipient will receive a link to the special message with their Gift Card


Terms and Condition
Gift Cards are partially redeemable and any unused balance can be used for future purchases up to the expiry date.